A decade ago, renewable energy was largely a pipe dream for environmentalists and some energy leaders, but didn’t account for a meaningful amount of energy usage around the world. But that has changed; the International Energy Agency estimates that by 2025 renewable energy will overtake coal as the largest source of electricity generation in the world. And the cost of building wind, solar, and energy storage plants is falling.

This creates a huge tailwind for renewable energy stocks that can build a large, profitable business. While there are certainly risks — as longtime renewable energy followers know — three of our contributors think First Solar (NASDAQ:FSLR), Brookfield Renewable Partners (NYSE:BEPC), and Equinor (NYSE:EQNR) are set to thrive for at least the next three decades.

Travis Hoium (First Solar): Few companies have lasted as long in the solar industry as First Solar. The thin-film solar panel manufacturer was founded in 1999 and has been a leading solar company since then.

You can see below that First Solar has been profitable for most of the last decade outside of a couple of years when it was upgrading manufacturing facilities to its newest technology. 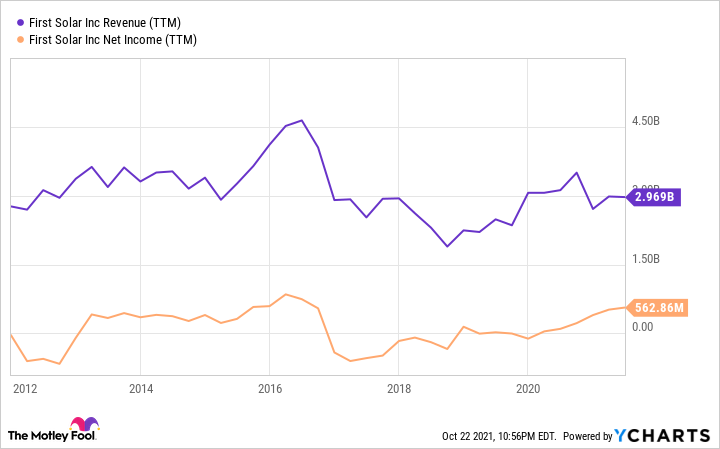 As tumultuous as the last decade has been for solar companies and solar panel manufacturers in particular, the industry has settled into a fairly mature state. Most major manufacturers have large scale and technology advances are happening much more slowly than a decade ago — and that’s good for established companies. Profit margins are rising and the threat of new entrants into the industry is falling. At the same time, the solar industry is growing and the need for solar panels is increasing.

To meet demand, First Solar will double production over about the next three years with much of that expansion coming in the U.S. And that should further improve the company’s industry-leading profitability.

There’s no doubt that the next 30 years will bring more volatility to the solar industry, but First Solar has proven its ability to adapt and grow. As solar energy grows, I think First Solar will, too, and that’s why it’s my pick to buy and hold for long-term investors.

Howard Smith (Brookfield Renewable): Many people don’t think about investments with a 30-year time horizon. But perhaps they should. Building wealth and a retirement nest egg takes decades. With that in mind, a core investment should focus on management as well as the future prospects of the business. And it should include both risk and diversity.

Brookfield Renewable is majority owned by the well-known Canadian asset manager Brookfield Asset Management (NYSE:BAM) and has deep operational experience with those roots. Investors can own the renewables business through the legacy publicly traded partnership shares and more recently with Brookfield Renewable Corporation, which avoids getting a Schedule K-1 for U.S. investors at tax time. But either entity gets an investor shares in one of the world’s largest renewable energy platforms.

The growth in renewable energy capacity is a global trend that will last decades. Brookfield Renewable is a way to play it through experienced capital allocators that have fiscal discipline. Management has a target to provide investors 12% to 15% total returns including 5% to 9% annual distribution growth. Over the past three years, as the use of renewable energy assets has become more commonplace, Brookfield Renewable shares have exceeded management’s target. 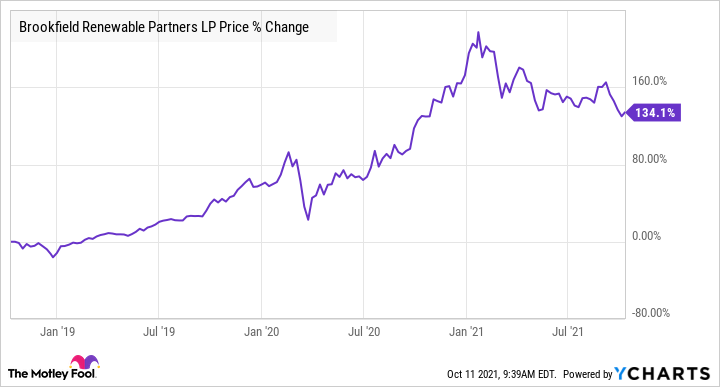 But so far in 2021, a decline in price has given investors a better opportunity to become owners. Shares are down more than 15% year to date, and are more than 25% off early January highs.

For investors looking decades down the road, it makes sense to have a piece of a growing sector like renewable energy. And letting experienced managers invest your capital in hydroelectric, wind, solar, and storage facilities is a responsible way to play it.

In 2050, Equinor could look nothing like it does today

Daniel Foelber (Equinor): It can be mind-boggling to ponder how different our day-to-day lives will be one, two, and especially three decades into the future. Thirty years ago, Google and Amazon didn’t exist. The personal computer and internet were in their infancy. And renewable energy costs were too expensive to compete with fossil fuels. Times have changed. Energy companies are having their time in the sun with oil and gas prices hovering around seven-year highs. But the long-term future for renewable energy looks brighter than ever.

Norwegian oil giant Equinor is the only integrated major that has produced a positive total return over the last three years. And for good reason. 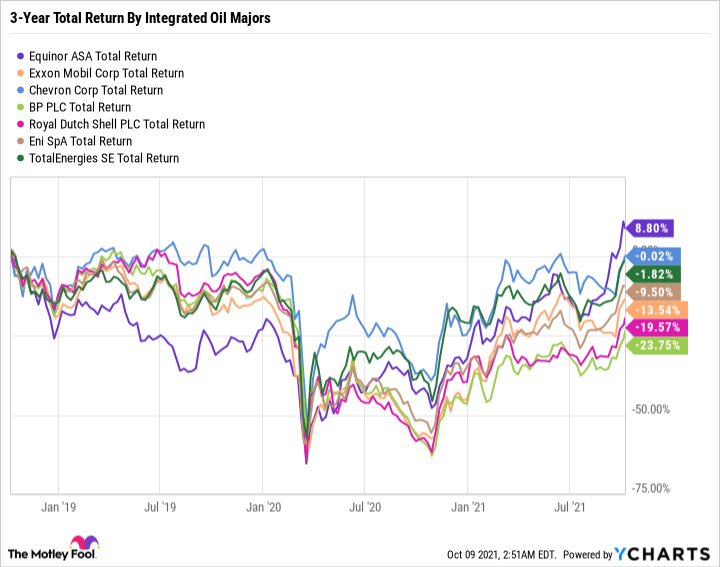 Equinor’s low cost of production, high profit margins, and dominant position in the North Sea give it a nimble portfolio that generates a ton of free cash flow. But Equinor has been drilling the North Sea for around 50 years, and that means much of the low-hanging fruit has dried up. The stage is set for Equinor to pivot in a new direction. It has chosen offshore wind energy, which is a great fit due to Equinor’s experience with offshore production, the shallow depth of the Norwegian continental shelf, and the high barriers in offshore wind energy versus onshore wind and solar.

By 2030, Equinor plans to allocate around half of its growth capital toward low-carbon investments. Whether it’s carbon capture and storage or offshore wind, there’s a good chance that Equinor will be more of a renewable energy company in 2050 than an oil and gas company. What makes Equinor an attractive stock to buy now is that it’s funding its long-term renewable energy investments with an attractively positioned oil and gas portfolio that should thrive over the short to medium term. Equinor stock has quietly gained 60% year to date, but it still looks like a good buy for investors interested in the long-term thesis.

Renewable energy should continue to grow for the foreseeable future and will likely overtake all other sources of energy worldwide. That’s an incredible trend for investors to follow and that’s why we think First Solar, Brookfield Renewable, and Equinor have a bright future ahead of them. 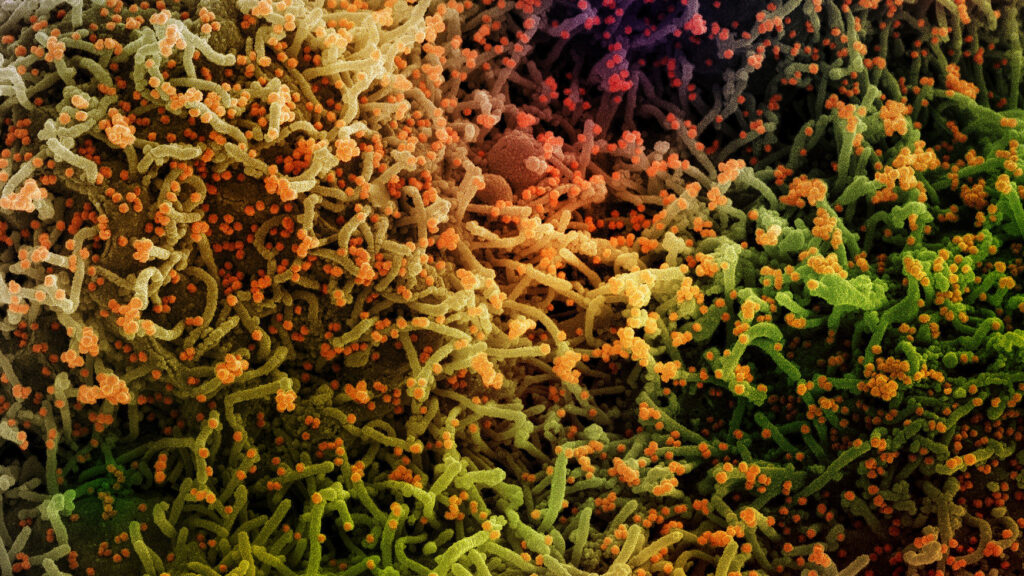 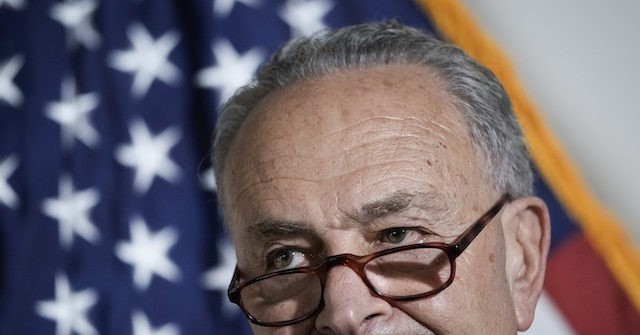